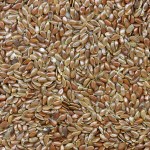 I dislike taking pills and syrups. I think I ended up with this distaste because of my mother (something of a hippy) and her dozens of herbal teas and remedies for everything from fevers to stomach pains to insomnia. I like to look at things in a somewhat more objective way. If there is a natural and equally effective way to treat certain conditions or symptoms I feel more comfortable taking a natural remedy that has been used for a few hundred years rather than a chemical compound, at least as a preventative measure.

My interest in seeds and nuts arose from my flatmate who keeps at least 4 pounds of nuts an seeds mixed in a biscuit container and has them as a snack or with his morning cereal. He keeps going on about how healthy they are but how much fat they contain, so we need to pay close attention to the quantities we consume. He also claims that they increase his sex drive. After looking into the nutritional values of seeds I came across the king of the kind, flax seeds and flax oils. For the best effects get your own whole flax and grind or crush it.

The flax seed has many ways of being consumed in order to release its benefits. If you soak the seeds in water for half an hour and then consume them, they release their mucilage, creating a natural laxative for the most sensitive of tummies. Swallowing the seeds whole apparently cleans up toxins that can be left behind in your intestine due to diets. Chewing the seeds releases essential oils. The seeds contain lignans that fight viruses, bacteria, fungi and cancer and they also contain lecithin which fights fat and cholesterol levels.

Through grinding or crushing the seeds you also get flax oil, which can also be purchased but needs to be cold pressed and stored in a dark bottle in the fridge and consumed within a month of opening. It contains unsaturated alpha linolenic (essential oil) as well as Vitamin E and carotene. It is an excellent substitute for other oils in salad dressings, or at least as a combination with olive oil, as it will release a nutty flavour and is excellent for your body.

What is gluten? Gluten defines proteins that are found in wheat and helps food maintain its shape, ensuring it holds together. ...

One notable development in the global fight against the virus is the introduction of an antibody test, specially designed ...