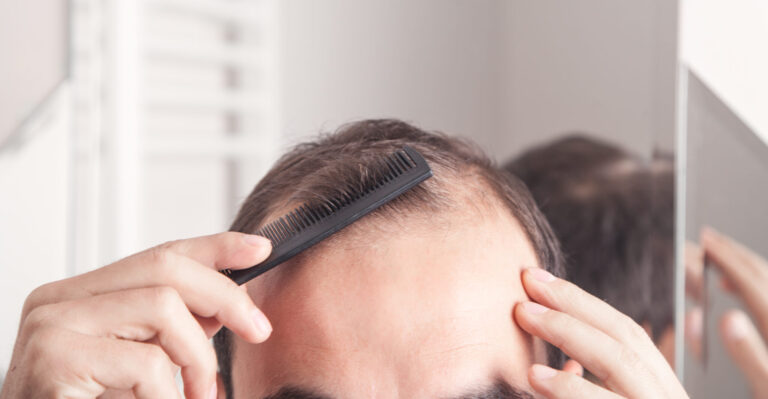 More than 50% of all men over the age of 50 will be affected by male pattern baldness to some degree during their lifetimes. Here in the U.K, it’s estimated that 8 million men are currently experiencing, or have experienced some form of hair loss.

Even with a large portion of the population being affected, there are still a lot of myths out there. Here are some of the most common, along with the truth to counter them!

It is (maybe slightly) logical to assume that this one could be true, given that DHT (Dihydrotestosterone) is a derivative of testosterone, which actually triggers male pattern hair loss in the first instance. Given that DHT levels are heightened during episodes of male hair loss, it’s not completely mad to come to the conclusion that high levels of testosterone would be the cause.

In actual fact, studies have shown that it’s down to how sensitive your hair follicles are to the hormones in your body and it’s thought that this sensitivity is primarily down to genetics, though diet and lifestyle probably play a part.

Myth No.2 ‘Using lots of product in your hair will cause it to fall out’

If you’re a fan of lagging the hair gel on thick, you’ll be pleased to know that this won’t cause pattern baldness anytime soon.

Cosmetic products in the U.K are made from ingredient recognized as safe by the relevant authorities and whilst some people may have bad skin reactions to certain products, there is no conclusive evidence to suggest hair loss is a consequence of using them.

Myth No.3 ‘Hair loss only happens with age’

It’s now fairly well-known that hair loss knows no age. In men who are genetically pre-disposed, hair loss can start as early as their teenage years, though this isn’t necessarily down to a health issue.

It’s possible that your hair may be susceptible to thinning but won’t sustain any serious loss until later in life. If you notice your hair thinning, the earlier you look into your options for treating it, the more successful treatment is likely to be.

Myth No.4 ‘Alopecia only affects hair on the head’

Alopecia is an autoimmune disorder that causes hair to fall out in large clumps and is more common in men, affecting around 70% of the population and some stage, vs 40% of women. Alopecia is a condition that affects the scalp, but also any other area of the body.

Common areas affected by alopecia include the eyebrows, pubic hair, arm hair, leg hair and even eyelashes. Alopecia can be traumatic, especially as it can often come about very quickly.

Don’t be afraid to seek support from mental health services if you’ve been affected by alopecia.

Myth No.5 ‘Hats cause hair loss’

This is a myth that circulates often but is certainly not true. Whilst it’s possible that you could sustain hair loss through repeatedly wearing a tight hat that pulls on your hair each time you remove it, this is certainly not the same as other types of hair loss caused by genetics or hormone imbalances.

There is zero evidence that hats will cause hair loss, so knock yourself out with your hat-wearing!