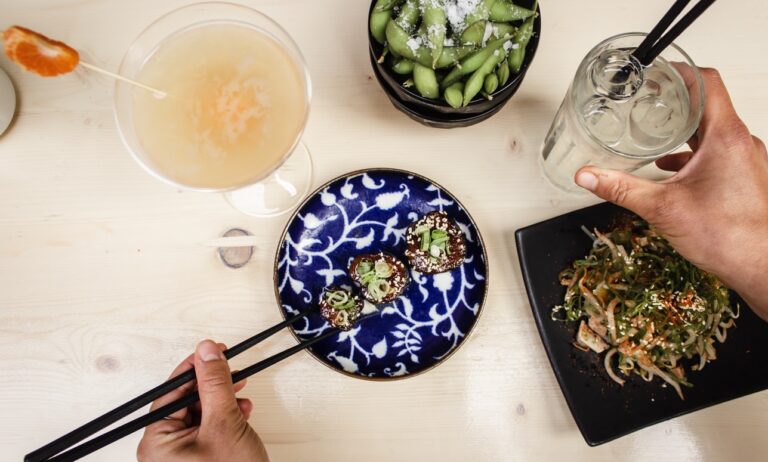 The Japanese archipelago has the one of the highest life expectancies in the world and their food culture, which dates back centuries, may offer us a clue as to why.

Contrary to popular belief, Japanese cuisine isn’t based on a staple of sushi, tempura and ramen noodles but instead adheres to an ancient set of guidelines called ‘Washoku’. Washoku is taught to children, both in the home and at school, from the age of 2 to 12 years old and the basic structure of a Washoku meal is ‘ichiju sansai’, which means simply: ‘one soup, three dishes’.

This combination is seen as providing the optimal basis for a healthy balanced meal, when paired with cooked rice and pickled vegetables (which are just assumed as integral to every meal in a Japanese home!). If only we could take a leaf out of their book here in the UK…!

Seasonality or ‘shun’ is a fundamental principle of Japanese cuisine, meaning that ingredients are used at their optimal state of freshness and nutrition. Foodstuffs that are produced locally are obviously best suited to this as they can be brought to market at their peak.

Contrast is another important consideration that guides ichiju sansai; whether that’s in terms of flavours or the degrees of processing: from raw to fermented and boiled to fried.

The rule of five colours adds an extra dimension to this, ensuring that a good selection of food groups are likely to be included in each meal. 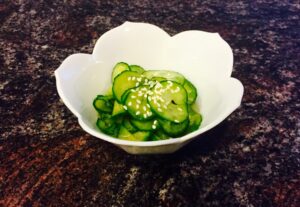 Pickled vegetables are an integral part of ichiju sansai and are often fermented, providing plenty of beneficial bacteria for optimal gut health.

Daikon radish is a very popular pickle ingredient, as are ginger, plums and cucumber. These can be prepared in advance at home if you want to simplify the process of creating your meal, or sourced from a specialist supplier such as the Japan Centre.

This website, and the internet in general, can be especially useful for resources as you first embark on cooking Japanese style, as the huge array of possible flavour combinations can feel pretty daunting at first.

Another excellent guide can be found at Just One Cookbook who produce a diverse Japanese cookery book and have some great recipes and menu inspiration on their website.

The soup is usually made using a miso base and it can very simply be left just at that.

Miso is a fermented paste made from soy beans, salt and the fungus aspergillus oryzae and comes in a wide variety of tastes: from the sweeter and milder white or shiro miso to the stronger red, brown or hatcho types (the latter being particularly popular for soup making).

Even on its own, miso is a potent probiotic and contains a wealth of important micronutrients, such as copper, zinc and riboflavin, as well as manganese and vitamin

Miso adds a wonderful depth of flavour and an umami taste but use it sparingly, it can taste very intense! It also contains quite a lot of salt, albeit in a less unhealthy form than you’d find in processed food, so it’s best kept to a maximum of 2 to 3 teaspoons per person per meal; or less if you have a high blood pressure or cholesterol issue. Fermented barley and organic variations are also available if you want to avoid genetically modified soya beans.

Try combining the miso with a dashi soup stock for a really authentic taste; either make your own (there are plenty of recipes online) or buy dashi powder or granules from a well-stocked grocery store or supermarket.

Finally, other readily available ingredients can be incorporated into the soup, such as mushrooms, seaweed or leafy greens, further increasing the already considerable nutritional benefits of this versatile staple.

So, the take away is that it can be as simple as a bit of paste and boiled water or as complex as the main dish – the choice is yours.

Traditionally the main dish is the one that contains the fish or meat but these can be substituted for a tofu, tempeh or vegetable-based dish if you’re vegetarian or vegan. You could add fresh ginger, mushrooms or peas to the rice dish too for a bit of added substance.

Saba Misoni, simmered mackerel in miso sauce, served with a Japanese cucumber salad makes a light and tasty supper that is quick and easy to prepare. The vegetable dishes can be made with whatever is to hand, as long as it’s fresh and in season and again there is plenty of inspiration to be found on the web.

ichiju sansai offers a simple formula to preparing an authentic Japanese meal, for which there are plenty of recipes to be found all over the web to suit your ingredients, tastes and time. So, if you’ve enjoyed the flavours of sushi, tempura and ramen, the chances are that you will take to this cuisine like a duck in water!

Previous Article:
Advanced Tips for The Dissociated Diet
Next Article:
Is Snacking Healthy?