Carrying fat is actually beneficial for your health 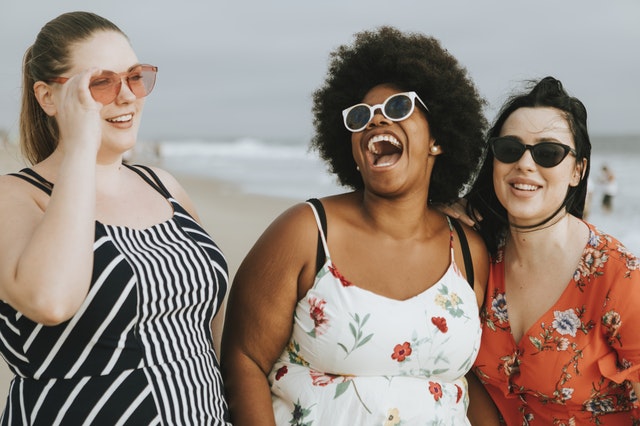 This year I decided I wanted to be healthier, so I joined the gym, started pinning healthy recipes on Pinterest, started tracking my calories and just because I wanted to be able to see what’s actually happening to my body, I also bought one of those smart scales. You know which ones I’m talking about. Those that tell you every single thing about your body composition, including weight, fat percentage and the amount of water in the body. To be honest, what I wanted most out of this was to see how much fat I actually have on my body so I can decide if I need to focus more on cardio at the gym. After opening the app attached to the scales, I saw it’s showing me two types of fat: subcutaneous and visceral. A quick search on google is telling me how much of these I should have in order to be considered healthy, which definitely intrigued me. But what really amazed me was the fact that it was quite hard to find general information on subcutaneous fat (I already knew high amounts of visceral fat is bad for you), but rather articles suggesting that I should get rid of this and what are the best ways to achieve this.

People hear the word “fat” and instantly assume that it’s something bad that needs to be removed because it negatively impacts your health. I think this happens because there is a certain lack of knowledge of what fat is and what it does to your body. If you were wondering what subcutaneous fat is, this is the fat that sits right under your skin.

There is a general misconception that all fat is unhealthy, which is definitely not true. On the contrary, this adipose tissue is vital in allowing the body to store excess calories when we take in more calories than we consume. Therefore, this helps in preventing other organs such as the heart or the liver to store fat, by storing it under the skin.

One of the findings says that if you have visceral fat, it’s better to have subcutaneous fat as well, as this helps in protecting the organism and reduce further damage. A study done on mice saw that by increasing the subcutaneous fat we can see an improvement in glucose tolerance and insulin sensitivity, which are detrimental factors in the evolution of diabetes. Also increasing the fat under the skin saw a direct link to a reduction of fat stored in other places, such as the liver, where fat should definitely not be stored.

Vital in the proper functioning of your body

Your body should accumulate and store fat. Fat is what keeps your vital organs working when you are unable to fuel it. Your body will use the fat stored under your skin when it can’t receive energy through food. But more than just transforming food into energy, fat also helps in releasing hormones. In fact, in the 1990s it was decided that fat was going to be classified as an endocrine organ, just because it helps in regulating different body functions. Therefore, subcutaneous fat helps in enabling puberty. For example, women who suffer from anorexia often miss their periods, and young girls who are underweight can experience a delay in puberty. Fat is what makes both estrogen and leptin.

Other benefits of subcutaneous fat include the secretion of the above-mentioned hormones who are extremely beneficial to the body. One of them is leptin which is an appetite-reducing hormone. Another one is adiponectin which helps in the better processing of fats and sugars.

Apparently, it also increases the size of our brains. If the fat you carry is healthy, this can affect the size of your brain. Different studies saw that people who were carrying fat that didn’t make enough hormones had smaller brains. People suffering from eating disorders who in consequence had low amounts of fat also saw a decrease in their brain size. It also enhances our immune system. If you are underweight, you are more at risk of getting sick more often than other people. This is because leptin (which we’ve talked about previously) is the one hormone that helps in strengthening our immune system

Subcutaneous fat is also associated with better cardiovascular activity. A study done on this subject was looking at people who had different heart diseases but were showing no symptoms. The doctors were measuring both visceral fat and subcutaneous fat, as well as calcium deposits in the arteries. What they noticed was that people who had large amounts of visceral fat, had their arteries in a terrible condition, leading to calcification of the aorta (aka the largest artery in the body). On the opposite, people with high amounts of subcutaneous fat had better functioning arteries.

Another general benefit of this type of fat is the fact that it attaches the dermis (the thick layer of tissue who sits below the epidermis) to your muscles and bones. It also helps in the proper functioning of your blood vessels and nerve cells. It controls your body temperature by not getting too hot or too cold.

I’m definitely not saying that having high amounts of fat is healthy, but we should definitely stop believing that if we have even the smallest amount of fat is unhealthy. Some of it it’s vital for the good functioning of our bodies. So next time you start pinching the fat under your skin and complain about it, remember that you need it in order to be alive.